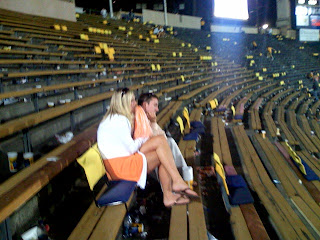 Great shot. And we do have to tip our hats to their fans. They're loyal (though some of them are beating themselves up right now) and, despite some ugly trash talking here and there, a very respectable group. They've been courteous towards us on their own blogs.

I hope they build on this game, beat Florida, and get a good shot at LSU in the SEC title game.

Not that this is likely, but how cool would it be to have Cal and UT run the table? If WVA and a few other schools faltered, we could see them in a bowl game. The ultimate tie breaker!