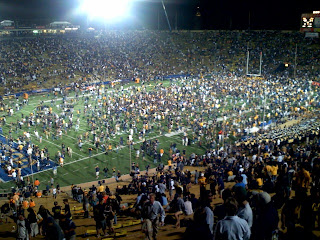 Oh how sweet our redemption! Great pictures. Wish I could have been there. But it was so satisfying listening to Al and Kirk on ABC sticking it back to Les Miles - on national TV! And just before the Vol's first punt the talk was about how dangerous DeSean could be on the return. And all DeSean did was was deliver on demand. A juking, cutting, accelerating thing of beauty. Oh yeah, its a great day to be a Cal Bear!
>Ed in Portland<

I'll be the first to tell you how good it felt as a Cal fan to see the Golden Bears stick it to the Vols. But rushing the field? Isn't this kind of act usually reserved for upsets? Weren't we favored to win this game?

Have to agree with Phil, though this was a very satisfying win. And I'm down with Ed, too: As much as I would have liked to have been at the game, the coverage was pretty sweet.

But back to Phil's point: We've got far bigger goals now. The UT game would have been huge IF we lost (how many seasons to recover? I shudder to think...). But now that we've won, we've GOT to stay focused. As great as this game was, we can get better. Much better.

The UT offense looked good, and while our D had some moments (especially rattling loose that first fumble -- awesome!) I would have liiked to see some more stops. The goal-line stand was huge. We played better late in the second half... credit to conditioning, perhaps, but we were also brining up our safeties because they just weren't going deep. Not a luxury we'll have in the Pac 10. (Aside: Most other Pac teams looked good this weekend.) We need to keep stepping up the D.

We could have also punched it in a few more times. Longshore rightfully pointed to himself when we had three chances to punch it in and had to settle instead for a field goal. (Wise choice, I think, but a shame we had the decision to make.) The goal-line fumble also seemed like a rushed play when we'd been forcing it to them from the beginning. (Two asides: First, I LOVED how we just ran at them , going at their strengths, and took it to them in the first half. Sweet. Second, capitalizing on a quick play got us another 7 -- the quick pass to Hawk -- so maybe I shouldn't grumble about the lost fumble. But we could have easily been up another 11.)

Tedford noted we got conservative. Again, I loved how we fought back and dominated after they came surging back, but I would have loved it more if we never let up.

We can't rest on these laurels. We've got a freakishly good team -- Best looked fantastic in his debut! -- but we've got to remain SO focused to make it through the whole season. I don't worry about taking care of Arizona in two weeks, but am a bit worried about a let down this week.

Live the hype, don't listen to it. And roll on.